Below is a video of the moment some protesters ordered a police officer out of a man’s truck at Ikeja Under bridge in Lagos state. 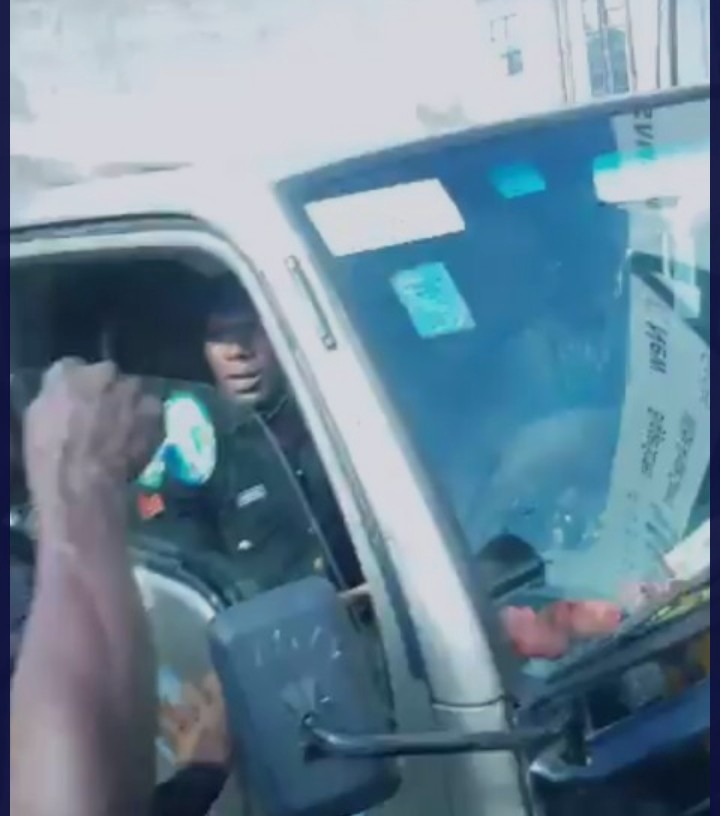 The youths who were protesting against police brutality in Nigeria spotted a police officer inside a man’s truck.

They suspected that the police officer was trying to extort the truck driver and they blocked the truck from moving.

The angry youths ordered the police officer to come down from the truck.

Some of the youths were heard shouting ‘What did he do?’ as they question the police officer for being in the man’s truck.

Some of them were also heard asking other protesters to bring out their phones and record what was happening.

When they had successful sent the police officer out of the driver’s truck, they asked the driver to go in peace.

Kwara State Governor AbdulRahman AbdulRazaq has invited the anti-graft agency Economic and Financial Crimes Commission EFCC to his state to conduct an independent probe to investigate allegations of corruption leveled against him by some persons in the state. A statement released by the Governor’s spokesman Rafiu Ajakaye today July 14, said the invitation for a […]

Governor Godwin Obaseki of Edo has renamed a street formerly known as Adams Oshiomole Crescent after the former Senate President, Bukola Saraki on Friday. Obaseki on Friday joined the Peoples Democratic Party (PDP) and has wasted no time in warming himself to his new political party and their leaders. The governor renamed street in Auchi, […]

“I Am The Only Woman In Nigeria To Slap Godswill Akpabio”

I am the only woman in Nigeria to have slapped Akpabio, says Dr Joi Nunieh , reveals the incident when Minister – Godswill Akpabio – wanted to take “advantage of her” Watch The Videos Below Akpabio in response to the corrupt allegations by Joy Nunieh,former NDDC MD, said the woman has temper problems which can […]

Suspected “Yahoo Boys” Seen Bathing In The Middle Of A Busy Road In Umuahia, Abia State