Watch The Video Below

Here is the moment the body of George Floyd, the African-American, who was murdered by a police officer and other 3 accomplices, arrived at his memorial service in Minneapolis.

That was a mark of their respect to the black man who died in the process of police brutality.

The memorial took place at North Central University campus, located about two miles from where Floyd lost his life. 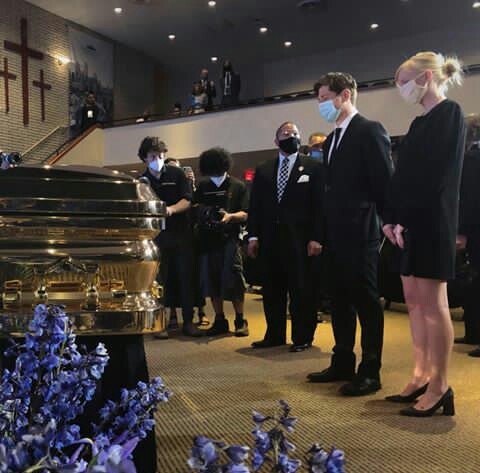 Mourners wore masks and bumped elbows, rather than hugging or shaking hands.

Reverend Jesse Jackson entered the memorial ground and prayed for several moments over Floyd’s golden casket as others followed his lead.

Honestly, this is a painful moment for Floyd’s family and I pray God gives them the fortitude to bear this loss.

George Floyd’s Second Autopsy Reveals Cause Of His Death

Mixed reactions as George Floyd’s second autopsy conflicts with the initial result from Hennepin County Medical Examiner. According to the first autopsy result, George Floyd’s death was as a result of effects of being restrained, potential intoxicants in his system and his underlying health issues, including heart disease. Despite the viral video showing the Minneapolis […]

Properties has been destroyed as Ajman market in Dubai is gutted by fire today August 5. This comes barely a day after an explosion rocked Beirut killing over 100 persons. The cause of the massive fire outbreak is not yet disclosed. It is not yet certain if there are any casualties

Madagascar on Sunday reported the first death of a patient suffering from novel coronavirus nearly two months after it was first detected in the country. According to local daily L’Express de Madagascar, the case is a 57-year-old man, a parking lot security officer at a hospital in the city of Toamasina. The first death comes […]

Drama As Boyfriend Proposed To His Girlfriend In The Market