Nigerian singer, Cynthia Ikponmwenosa Morgan, who is popularly known by her previous stage name Cynthia Morgan but now Madrina has revealed that singer David Adeleke who is also known as Davido has been ignoring her calls.

Cynthia Morgan revealed that Davido refused to answer her calls in an interview with HipTV.

She said that she tried to reach out to Davido by calling him several times and he refused to answer her call or reply her messages.

Cynthia Morgan however said that Davido sent her a record which she did a demo verse with and sent back to him.

She said that it has been three months now since she sent the verse and she she not heard anything from Davido.

Recall Davido in a tweet on his Twitter handle asked Cynthia Morgan to call him after she had an issue with her former music label boss, Jude Okoye. 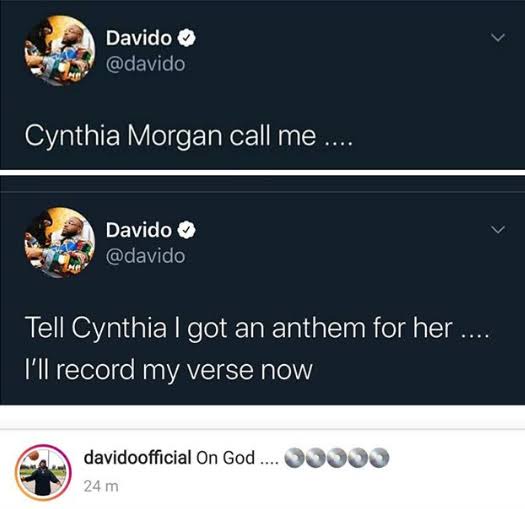 Jude Okoye who is a the owner of Northside entertainment, a music label which Cynthia Morgan was under said that she is owing him some money which he spent on shooting her music videos while Cynthia Morgan claimed that Jude Okoye did not promote her but was only shooting videos.

Reacting to the video, some social media users have accused Davido of clout chasing while some are wondering how Davido sent Cynthia Morgan a record after she claimed that Davido refused to answer her calls.

Lagos BDC operator, Ismaila Mustapha, aka Mompha, has been rearrested by the Economic and Financial Crimes Commission (EFCC) over alleged money laundering. Mompha is currently facing money laundering charges before the Federal High Court. It was gathered that he was re-arrested last Friday when he went to the EFCC office in Ikoyi, Lagos. He was […]

Another marriage hits the rocks as Former Minister of aviation, Femi Fani-Kayode and his wife Precious Chikwendu have gone their separate ways. SDK is reporting. The report states that Precious had allegedly moved out months ago without her four sons as the former Minister had taken over the kids and put them under the care […]

American rapper, Onika Tanya Maraj-Petty, aka Nicki Minaj, is a new mom. Billboard reports that she welcomed her first child with husband Kenneth Petty on Wednesday, Sept. 30, 2020 in Los Angeles, USA. The baby’s name and sex is yet to be revealed. Recall that the 37-year-old queen of the Barbz announced her pregnancy with […]